What Are Surprise Out-Of-Network Bills?

Surprise out-of-network balance bills occur when a patient receives care from a doctor who:

Typically, this happens in the emergency room. The patient presents to an in-network hospital, but the specialists on call are out-of-network. It can also occur during elective surgeries (by in-network surgeons) when the anesthesiologist or pathologist is out-of-network.

You have probably seen the news stories. Typically, the narrative is that these patients are exploited by predatory OON physicians who take advantage of the patient’s lack of choice. Patients get “exorbitant” bills that can bankrupt them. Or the insurance company has to pay, and premiums go up for everyone.

THE TRUTH IS THISAlmost all doctors charge based on a published guide that lists usual and customary fees. This printed guide takes into account the high cost of providing medical services in States such as New Jersey.

Who gets stuck with the unpaid bill? You do. Hence the “surprise.” You thought you were covered.

You pay high premiums for health insurance so that that you are financially protected at the most vulnerable time in your life – when you need medical care. Now, even if you survive that trip to the ER, you may not survive the nasty medical bill that your insurance company sticks you. All in the name of corporate profit.

Surprise OON bills are not a function of predatory billing practices by physicians. Instead, these surprises result from insurance carrier lies about the expensive health care plans they sell.

The misleading nature of the OON narrative is alarming to conscientious providers of emergency services who treat patients without regard to their ability to pay.

In reality, “Surprise” OON bills result from insurance carrier misrepresentations about the financial protections their plans offer, not from unethical OON billing. Currently, New Jersey residents have no consumer protections at the time they purchase a health plan. They can be sold small plans that woefully under-reimburse providers, typically at 5-10% of Usual and Customary (UCR) Charge. These artificially low reimbursements leave the patient with significant, unexpected financial liabilities. Consumers will not recognize this fact until they encounter the health care system, at which time it is too late. Hence the "surprise."

The purchase of an expensive 80/20 OON plan, for example, might reasonably assume that the policy will pay 80% of a provider’s charge. This is currently not the case in New Jersey. In reality, that “80%” may refer to a Medicare-indexed fee schedule, which typically pays 5-10 cents on the dollar. Carriers are not obligated to disclose to consumers how they calculate OON reimbursements, or how these reimbursements relate to UCR. The resulting paid OON claim might represent only a small fraction of provider charges. The consumer is unaware of this discrepancy until a provider's bill has arrived.

Below is an example of a Summary of Plan Benefits provided by an insurance carrier for one of its out-of-network plans.

This plan offers OON benefits at an 80% rate. The fourth column states, “Your Cost If You Use an Out-of-network provider” is 20%. Any reasonable purchaser of this health insurance product would conclude that the other 80% refers to an OON provider’s charges, or at least Usual and Customary (UCR), and will be paid by the insurer. The expense of this OON plan is thereby justified.

However, small print buried in the same document suggests otherwise.

In the small print, the insurance company has replaced Usual and Customary (or the doctor's actual charge) with "allowed amount," and will pay 80% of that value instead. What does that mean? How does “allowed amount” relate to UCR and billed charges in the community? An investigation will reveal that “allowed amount” is only a small fraction of the actual bill.

Most health care consumers do not read the small print, and if they do, are unlikely to discover its meaning, nor understand the significance of Medicare-based reimbursements.

They certainly would not note the misleading nature of the disclaimer below – in the insurance company's example, there is only a $500 discrepancy between OON “charged” and “allowed” amounts. In reality, this discrepancy can be tens of thousands of dollars. That means that the patient is responsible for that discrepancy. The insurance company will not pay it. 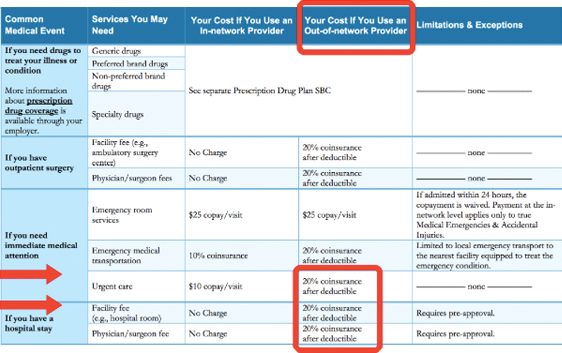 In the small print, the insurance company has replaced Usual and Customary (or the doctor's actual charge) with "allowed amount," and will pay 80% of that value instead. What does that mean? How does "allowed amount" relate to UCR and billed charges in the community? An investigation will reveal that "allowed amount" is only a small fraction of the actual bill.

New Jersey health care consumers currently have no protection against the above, misleading insurance company practice. In any other setting, this practice would be considered fraud.

Surprise OON bills are not a function of predatory billing practices by physicians. Instead, these surprises result from insurance carrier misrepresentations about the protections offered when they sell expensive health care plans.